Through The Past Darkly
The Stones Tumultuous 1967 European Tour 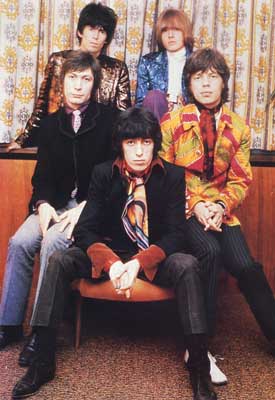 HOW DID THE BAND SURVIVE THIS TOUR?
The management for the Rolling Stones suddenly sent the band out on a Spring tour of Europe in 1967 immediately after Mick and Keith were busted for drugs. The tension among the members of the group were also strained by the defection of Brian Jones' girlfriend, Anita Pallenberg, running into the arms of guitarist Keith Richards. These two events adversely affected the interpersonal relationships within the band. Performing live in concert requires unity for a band. This tour would be Brian's last stand.

1967 was a tumultuous year for the Rolling Stones as a band. Pressures inside and outside the group were making it difficult for band members to get along with each other, find time to record new material in the studio, and function together on tour.

The Redlands bust came one week before the release of their fifth studio album, Between the Buttons. Once the news of the bust was made public, everything surrounding the Stones became controversial. Embarking on a European tour two months after their arrests may not have been the ideal career decision for the group at this time. The U.K. bust seriously complicated the band's international touring mobility.

Brian may have been fortunate not being nailed at Redlands, but he became a target of Scotland Yard, and the heat was on to bust him and break him. Compounded by the defection of Anita, Jones had to endure a touring schedule standing on stage next to the bandmate who he felt had stolen his girlfriend behind his back.

Rolling Stones tours are renown for their circus atmosphere, unrestrained mayhem, and exemplary performances. This tour almost put an end to the Stones. 35 years later, here is the untold story. 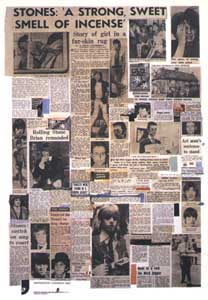 Another Good Bust - Another Good Frame
Brian Jones was talking in a London nightclub when a journalist eavesdropped on his conversation. Mistaken for Mick Jagger, News of the World printed these remarks attributed to Jagger, and Mick threatened to sue the newspaper. This provoked the newspaper to tail the Rolling Stones and set them up for a bust.

On February 12, 1967, the police were tipped off that Keith Richards was hosting a party in his home at Redlands where illegal drug use would be detected. George Harrison of the Beatles was a guest present, holding up the bust. Once Harrison had left, British police closed in on Redlands to search the premises for illegal drugs.

This abuse of police authority was the beginning of a police campaign of harassment to persecute the Rolling Stones. The Stones attempted to pay a bribe of £7,000 to squelch the incident. News of the Redlands bust was reported on March 18, one week before the Rolling Stones were to undertake a tour of Europe to promote their latest album, Between the Buttons. 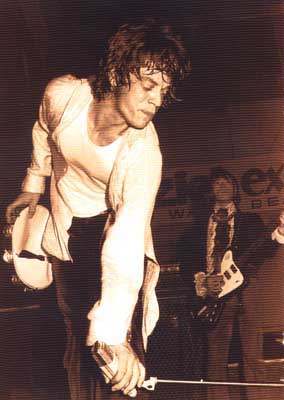 Deceit and Defection
Brian Jones fell head over heels in love with Anita Pallenberg, a stunning model and actress he met on tour in Germany in December 1965. She would prove to be a deadly influence on his short, tragic life.

Jones and Ian Stewart founded The Rollin' Stones in July 1962. They would invite the other four members to join their R&B combo. When Andrew Oldham became co-manager of the Stones in 1963, he aligned himself with Jagger and Richard to promote them as the songwriters for the fledgling band. This demotion ostracized Brian and permanently pitted him against the other members of the band.

After the Redlands bust, members of the Stones decided to travel abroad to escape from the hassles of the local police. Brian fell ill on his birthday, February 28, and stayed behind near Toulouse to recuperate from pneumonia.

The traveling party was reduced to Tom Keylock chauffeuring Keith and Anita while they began an affair in the back of a Bentley on March 2. Later, Anita flew back to travel with Brian to Tangiers.

By March 15, the attraction between Keith and Anita was openly flaunted poolside. While Brian was lured away by another friend under a directive from Keith to take him to hear native music, Keith decided to split with Anita and desert Brian without a word in their wake.

Returning from a fantastic afternoon of enjoying local music, Brain found himself abandoned and went into hysterics running throughout the hotel in frantic search of a message from his missing friends. This act of desertion would wreak a horrible impact upon Brian from this point on in his life.

He arrived in Paris the following day a shattered man. His paranoia affected a personality change that altered his facade. Brian had lost his band to the leadership of Mick Jagger; and now he had lost his love to fellow guitarist Keith Richards. The stress of losing Anita was devastating to Brian.

Customs, Communists and Coup d`etat
Incredibly, one week after news of the bust was reported and 10 days after Anita switched her allegiance from Brian to Keith, the Rolling Stones embarked on a European tour. With all of the internal pressures acting upon the relationships among band members, the Stones would find themselves under constant fire from customs authorities as their European tour commenced.

The band arrived in Sweden on March 24. Swedish customs agents searching for drugs riffled through 17 pieces of luggage. Members were subjected to body searches. The reality of the Redlands bust had stigmatized the Rolling Stones forever.

The opening tour date in Malmo was marred when police turned off the electricity to the band's amplification to interrupt the concert. In Orebo, rioting teenagers put policemen and five fans in the hospital. Audience calmness welcomed the band throughout all four dates in Germany.

With two shows in Austria, rioting again surfaced as 154 fans were detained by the police during the concert. Oddly in Rome with an older audience in the front rows, the Stones found they had to deliver a more professional performance with Jane Fonda, Gina Lolabridgida, and Brigitte Bardo as guests.

Flying into Paris on April 10 was another major hassle for the band at the hands of airport customs agents. Their Paris performance was one of their best concerts on this tour. However, money and belongings were stolen from their ransacked hotel rooms at the George V.

Departing France from Le Bourget Airport on April 12 was a harrowing experience for the band. A French customs official began berating the band in his native tongue as tensions escalated. After being punched in the face, Keith was grabbed by his lapels and threatened, receiving another punch in the chest. Keylock fended off another punch to Keith before it was determined the inflamed French border guard had wanted each member to introduce their passport individually, instead of all at once.

Landing in Warsaw later that day, the Rolling Stones made an historic visit behind the Iron Curtain, the only rock band to do so during the height of the Cold War in the 1960s. The Stones were driven to the dull, gray Orbis-Europjski Hotel. Everybody was in and out of everyone else's room checking out who got the better digs. There was no television, the radio stations were jammed with interference, and dinner cost the band a small fortune.

During the morning before their two scheduled concerts, band members noticed each of them had agents tailing their every move. When they tried to exit the hotel, the Stones were surrounded and told to remain inside. Band management failed to notify the hotel about their press conference and had to bribe the hotel to allow the media event to proceed.

Arriving at the venue, the Stones were greeted with rioting in the streets because Polish Communist Party members had reserved all of the tickets for both performances. Eastern Bloc fans were assaulted by the police. The shows were good, but anyone who stood up to express their enjoyment during the concert was reprimanded by the police to sit quietly. This demonstration of force angered the Stones.

After the concerts, the Stones canvassed Warsaw streets for Polish fans to distribute all of the albums and singles they had as an apology. Departing the next day, the Stones found, coincidentally, their bill at the hotel matched the amount of revenue from their concerts. Landing at Zurich Airport, the Stones were greeted by rioting fans, and the police simply waived them through customs.

Their concert on the evening of April 14 remains one of their wildest stage experiences ever. Mick was tackled to the stage and pounced upon by a fan. Keylock broke his hand, attempting to fight the fan off. The following performance in Den Haag on the next date went without incident.

Brian flew into Athens for the last date on the tour, joining the rest of the members already there. April 17, 1967, would be the last official appearance Brian Jones would make live on stage with the Rolling Stones in performance. However, the Stones with Jones performed two songs at the New Musical Express Poll Winners Concert at Wembley Arena in May 1968.

The Stones were situated in the middle of the stadium field with the Greek fans in the stands. Police surrounded the stage and repressed displays of enthusiasm by the fans. Keylock was sent to throw rose petals into the audience when police dragged him back to the staging area. The Stones ceased their performance with pandemonium breaking out in the stands.

On April 18, the Stones entourage left Greece, but bassist Bill Wyman remained to holiday with his girlfriend and son. The band had been harassed by Greek officials, resulting in Keith being detained and having to catch a later flight. Two days later, Wyman heard gunfire as Greece was consumed by a military coup, deposing the Greek Royal Family.

A curfew was imposed cutting him off from all communication with the outside world. As military police swarmed Athens Airport, Wyman departed for home on April 23. Bill was besieged by BBC reporters to smuggle out newsreels of footage of the coup, but he refused. Wyman was thoroughly searched and stripped of any Greek currency in his immediate possession. 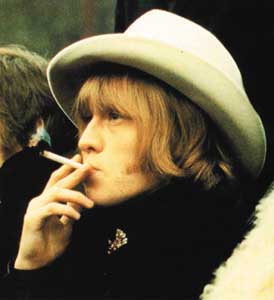 No Expectations
With the tour behind them, the Rolling Stones had to await the trial of Jagger and Richards. Brian had composed the filmscore for Mord Und Todschlag, starring Anita, Germany's entry in the April 1967 Cannes Film Festival. He attempted one final reconciliation with Anita, approaching her at the premiere. Keith hid in his hotel room while Brian argued with Anita to return to him.

Again framed by corrupt police, Brian Jones was busted the very same day his two fellow band members were appearing in court on May 10. The police harassment on Brian would accelerate his inability to function and participate with the band.

After months of inactivity, the Stones released the single "We Love You" in August as a thank you for the loyalty and support of their British fans. Brian's horn arrangement and performance gave the track a distinctive Arabic flavor. Jones would officially leave the Rolling Stones on June 8, 1969 and within 25 days, be found drown in his own swimming pool at Cotchford Farm in Hartfield, Sussex.