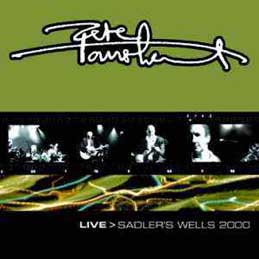 Live > Sadler's Wells captures the compelling Lifehouse music before an audience. Recorded in February 2000 at Sadler's Wells Theatre, the premiere concert performance was a lavish production of the Lifehouse project music. Lifehouse is the legendary epic project Pete Townshend was composing for The Who as a follow-up recording in the shadow of the mega-successful 1969 rock opera Tommy.

Empowered by a career-enduring desire to see Lifehouse completed kept this musical concept alive. This endeavor culminated in a commissioned millennial project of Lifehouse as a play broadcast live over BBC Radio 3 to commemorate the celebration of the Millennium on December 5, 1999.

Townshend's live recording of "Goin' Mobile" is also its debut stage performance. With a sparse arrangement, the song is a lighthearted tune among the songs that collectively comprise the Lifehouse project. "I Don't Even Know Myself", the B-side of "Won't get Fooled Again", has become a modern stage staple for The Who. Townshend's rendition is a little softer than the trio's stage version.

"Pure And Easy" was actually the song that germinated the Lifehouse concept. Chyna sings selective vocal passages handled by Roger Daltrey. "Sister Disco" is performed slower than the 1978 studio take with synthesizers creating a swirling background of sound without the guitar break. Townshend gets funky on "Relay", another song The Who have retooled for current stage presentation.

His live recording of "Who Are You" on Lifehouse > elements from a Sheperd's Bush Empire performance eclipses this version from Sadler's Wells. "Can You Really Help The One You Love?" is the singular new number composed for this premiere presentation. On solo acoustic guitar, Townshend attempts to conclude his musical tale, closing with an orchestral outro. "Too Much Of Anything" failed to be included in this live production.

Lifehouse was originally conceived as a screenplay, forecasting a society set in the future manipulated by a government where people are controlled by information and stimulation they receive via publicly distributed "reality suits". Townshend's vision parallel's the internet and virtual reality. His story culminates with a hacker who cracks into the grid, enticing people outside of their homes to congregate at a rock concert with music as a positive, unifying force that has potential to save the world.

As Townshend tried to move forward with his Lifehouse project, he was met with opposition from those within his organization. Tommy had mushroomed into a runaway international hit, which hampered The Who as Townshend struggled to create new music in the face of a deaf, dumb, and blind kid that demanded constant attention. The band was consumed by the immense success of Tommy, stifling their artist progression.

Sessions for Lifehouse were undertaken over different phases. The initial songs were generated as demo recordings in 1970. The Who set up shop at the Young Vic Theatre in February 1971, to perform live before an invited audience. In March 1971, studio recordings were conducted at the Record Plant in New York, and again at Stargroves. Producer Glyn Johns tracked the final process at Olympic Studios, which resulted in the masterpiece Who's Next.

Material intended for the proposed double album Lifehouse project would surface across several formats. The bulk of the best of these songs were released as Who's Next in 1971. His first solo album, 1972's Who Came First, included some outtakes. Three Who singles, "Let's See Action" October 1971, "Join Together" June 1972, and "Relay" November 1972, were songs lifted for release from the Lifehouse project.

The remastered Odds & Sods originally released in 1974, features four additional unissued recordings. Two other songs appeared as B-sides on Who 45s. Two decades later, Townshend's ambitious 1993 solo effort Psychoderelict utilized demos pioneering the use of the synthesizer and portions of the Lifehouse storyline.

Townshend compiled a six disc collection of material composed for Lifehouse that he has amassed over his career. The Lifehouse Chronicles is a Boxed Set available at eelpie.com exclusively online. Lifehouse > elements was released commercially. Tommy was reborn during The Who tour of 1989. Quadrophenia was staged live in 1996 and 1997. It's all together possible, Townshend may decide the time is ripe for a live presentation of Lifehouse with his bandmates from Acton, The Who. 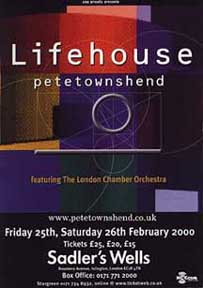 Disc 2: Baba O'Riley * Hinterland Rag * Behind Blue Eyes * Let's See Action * Sister Disco * Relay * Who Are You * Join Together * Won't Get Fooled Again * Tragedy Explained * The Song Is Over * Can You Help The One You Really Love? 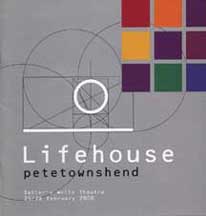